SDC Verifier CEO Wouter van den Bos has recently presented a new startup in the Energy Transition industry. Rable – is a self-supporting system that lends itself well to installation on weak roofs due to its clever construction.

Patented self-supporting Rable solar panel system technology reduces the weight of solar panels by up to 25 kg/m2, which is approximately 50% lighter than current PV systems and cuts back on the surface required for them, thus saving your money. The construction and the panels are also 100 percent recyclable and produced in the Netherlands. With this local sourcing and cooperation, the production process significantly less CO2 emissions than the current panels from China.

SDC Verifier team created an FEA model of self-supporting frame and calculated snow and wind loads according to the NEN 7250 and the Eurocode guidelines.

Rable, a collaboration of several companies, has developed an affordable method for installing solar panels on large flat roofs. The self-supporting construction of solar panels was partly developed with financial support from the Smart Energy Systems program of the municipality of Rotterdam. This initiative addresses a niche market for which there is not yet a good solution. Also, it has a link with the potential of this innovation and the policy and strategy of Rotterdam. 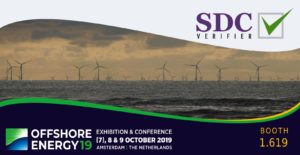