Tubular joints are usually used in the offshore structures surviving a fluid or an air loading due to their mechanical and structural properties or in a corrosive environment due to the manufacturing costs. The resistance of such joints is described in various standards. In SDC Verifier it is possible to check the resistance according to: API RP 2A LRFD (1st, 1993), ISO 19002 (1st, Dec 2007), and Norsok N004 (Rev. 3, Feb 2013).

In this article we describe the procedure of calculation according to the joint standards. For all general FEA programs (Ansys, Simcenter 3D, Femap) the calculation procedure for a joint check is the same, so SDC Verifier provides a solution for all of these software solutions.

A simple uniplanar tubular joint in SDC Verifier is represented by the following connection:

The following terminology is used:

Each tubular brace should be classified according to the loading and connection joint geometry:

Brace classification can be a mixture of the three types above.

Tubular braces are checked on axial, in-plane and out-of-plane bending loads as other types of brace loading (torsion and shear) do not cause bending in a chord wall.

In the FEM model the overall structure is designed with tubular beams. SDC Verifier can obtain all the necessary results and dimensions directly from the geometry and the FEA results without any extra user input.

For checking the joint the automated procedure in SDC Verifier takes the following steps:

Instead of describing all the load sets directly in the FEA software, SDC Verifier speeds up the calculation process by using base load cases (or individual loads) directly and combines these in load sets (linear combination of these base cases) and uses load groups to get the worst situation of all the load cases in 1 picture! Hereby all required load scenarios prescribed by the standard can be easily considered without extra efforts.

In the following example a jacket model will be used loaded with wind and wave at 0°, 45°, 90° and 135° to the global X direction and the following load combinations:

Since the structure is symmetric and the area under the loading is equal in opposite directions, the results of the initial wind/wave loads can be transformed using the opposite factor -1 (e.g. combinations from 180° to 315°).

All loads sets are combined into 1 single load group.

SDC Verifier recognizes all the joints in the model automatically – see the top part of the model used for the recognition and the results overview:

A table for the joint check with the overall utilization factor > 0.7 is sorted in the ascending order:

For the load different from the load group, it is possible to see all the calculation parameters used for calculations of utilization factors and also plot original and projected axial forces, gap/overlap sizes, and brace classification with labels for selected connections. On the image below labels for a single connection are shown:

Projected forces (to be perpendicular to the chord) form all the braces are balanced from the one side of the connection that results in K classification. The gap is calculated only between the differently loaded braces (tension and compression). Results for brace 3 are determined by weighting the portion of gaps (g1 and g2 on the picture above) of its projected force balanced by braces 1 and 2.

After the critical connections are found it is possible to preview the governing results of joint checks among all the load combinations using the flow table over multiple loads:

Check joint results are displayed for each brace of the selected tubular connection. If any utilization factor is caused by the load, it will be displayed in the table.

Except for the tables, it is also possible to preview results on your FEM Model – for instance picture below displays a combined axial and bending utilization factor for all 3 standards:

Besides, these items and many others can be highlighted in your own simulation report, which can be generated with just a few clicks!

SDC Verifier contains all the necessary tools to perform the joint check quickly directly within your favorite FEA software. (Ansys, Femap and Simcenter 3D (NX CAE)) are currently supported. The automatic connection recognition with all necessary dimensions, dynamic brace classification and the usage of the envelope results of a load group reduce the calculation and postprocessing time significantly. If you are looking for a tool to check the results of your Ansys, Femap or Simcenter 3D model directly within your FEA program, SDC Verifier offers you all the tools to comply with Standards without tedious manual postprocessing. 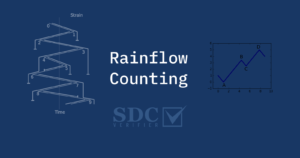 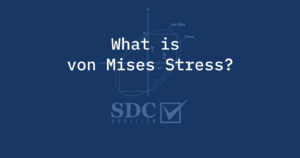 What is von Mises Stress?